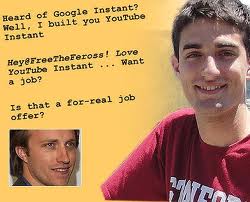 year old  Stanford University student and Facebook software engineer intern, Feross Aboukhadijeh.  The functionality created by Feross allows its users to search the YouTube video database as they type. It follows on the heels of Google Instant, and has been described as a “novelty toy”, a “catchy little title”, a “prototypal digit to tie the “instant” bandwagon” as well as a “completely excellent way to waste 15 minutes”.
After completion of his development, he tweeted in his account as “Heard of Google Instant? Well, I built YouTube Instant. http://fb.me/FEW3VAa3”
Later, Feross was offered a job from YouTube CEO Chad Hurley through twitter shortly after he created that functionality. At the point of YouTube Instant’s creation, He  was a summer intern at Facebook, and has said that he is working on a Secret Facebook project.
Feross’ YouTube Instant URL : http://ytinstant.com

I Just want to tell you all that I also had such type of thoughts about Google Instant functionality in YouTube, Wikipedia & other Major type of Websites…But the problem was that I didn’t go for the development further…So Please remember Imagination & Implementation are entirely  different! Hats off to Feross anyway…..:)